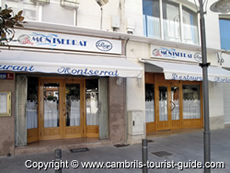 Montserrat is a classic Cambrils seafood restaurant. Its decor is traditional and understated. The focus is on the quality and the freshness of the food. I went to the Michelin recommended restaurant to sample their affordable Menu del Dia (three-course lunch menu) - an opportunity to eat in a top-class restaurant on a smaller budget.

I was thoroughly satisfied by the quality of the service and the delicious simplicity of the food. In all of my experiences of Menu del Dias in Spain I would say that, all things considered, this was definitely one of the best.

This page provides a full review of Montserrat Restaurant in Cambrils: the sort of food on offer, the service provided, the decor of the restaurantand the prices

Bus Transfers to / from Cambrils

Bus Transfer from Reus Airport to / from Cambrils

Bus Transfer from Barcelona Airport to / from Cambrils

Private Transfers to / from Cambrils

Private Transfer from Reus Airport to / from Cambrils

The food at Montserrat Restaurant 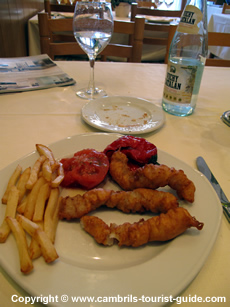 An example of the food at Montserrat Restaurant

The focus of the menu in this seaside restaurant is fish. I visited at lunchtime to sample their Menu del Dia. I was pleasantly surprised right from the beginning when I was given a plate of salad that came free of charge, prior to the starter. Despite its simplicity, it was clear to me from the salad alone that the standard of the meal was going to be high. Forget tinned sweetcorn or lashings of mayonnaise. This was a well presented and fresh salad that showed respect to its ingredients - crisp lettuce leaves, red peppers, onions and small Catalan olives.

For starter I chose a traditional Catalan seafood soup. This was served ladled from a larger ornate silver bowl, was piping hot and smelt of the sea. The soup was generously loaded with white fish, mussels and the odd prawn. The broth itself was thick, warming and had an authentic fish flavour that suggested to me that its ingredients were made from an authentic fish stock. It was good to have the opportunity to try this most traditional of Catalan dishes at its very best.

For main course I was given the choice of pork or two different types of fish. I was then pleased to be offered the choice between receiving my fish served whole with bones or 'a la romana' (battered). Opting for the true Brit's choice, and curious to see how the batter would turn out I requested my monkfish a la romana. The result was delicious - fresher than fresh fish in a light batter that served to enhance rather than detract from the fish's flavour. This came with a flavoursome slow-roasted tomato, topped with sea salt and thyme, a roasted red pepper and homemade fries. A simple and classic Spanish 'plato combinado' executed with care and love for each of its elements.

For dessert I opted for a generous helping of fresh melon. Although if I had more room, I would have tried out one of the traditional Catalan desserts, such as Crema Catalana (like a crème brulee) or Tarta de Santiago (an almond tart). The meal also included fresh bread and a drink of my choice.

The décor at Montserrat Restaurant 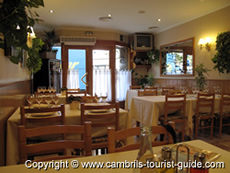 The Décor at Montserrat Restaurant

Montserrat restaurant's décor gives little clue as to the standard of food that is on offer. It is an understated and traditionally Spanish looking place. The tables are covered in crisp lemon yellow tablecoths and topped with the usual array of condiments. The walls are wood panelled and match the wooden chairs. There are some hints of its seaside location, with some framed nautical themed paintings on the walls. In general, the restaurant's aesthetic is simple and understated whilst remaining warm and inviting.

The service at Montserrat Restaurant

The service at Montserrat restaurant is likely to have had a hand to play in its Michelin recommendation. On entering the restaurant I was made to feel immediately welcome, with a slight air of formality that I would not normally associate with eating out in Spain. The two staff who served me were extremely helpful and enthusiastic in answering any questions that I had. In a quiet off-season restaurant my food was served promptly, but after sufficient to reassure me that it had been cooked fresh. Throughout the meal I was attended to thoroughly, with my glass topped up as it was emptied and more bread offered when mine ran low.

Montserrat Restaurant sets a high example to other restaurants offering traditional Spanish and Catalan cuisine. It offers mouthwatering and classic seafood dishes that are served in a simple style that demonstrates that chef's respect to the ingredients and their quality. The affordable Menu del Dia offers an opportunity to eat at this quality establishment without breaking the bank.

Learn how to reserve your airport transport to guarantee your place on the bus.

How to arrange bus transport from Reus Airport

Our guide will show you everything you need to know to book a private transfer from Reus Airport.

Click here to learn more about arranging your private transport.