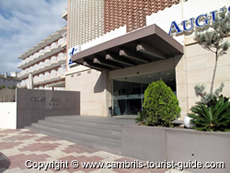 Cambrils is a small town. However, due to its popularity amongst tourists, it has its fair share of hotels. This ensures that, despite the disappointing lack of five star hotels actually in the town centre, there are a generous variety of choices of one to four star hotels.

You will find that a large majority of Cambrils' hotels are located on or very close to the beach. Most of them also have their own pool. Cambrils is popular as a beach town, meaning that it gets quieter during the winter months. If you plan to come during the winter period, it is worth checking which hotels are open, as many of them close during the quieter months (see below).

On this page you will find links to listings for all of the one to five star hotels in Cambrils. The listing provides a short description of the hotel, the address, telephone number, fax number, official website address and e-mail address. It also provides details of the number of rooms in each hotel, the distance that they are from the beach and their opening times during the year.

For the most popular hotels in Cambrils we have also provided full reviews. Each review provides details as to the rooms in the hotel, the pool and other general facilities, facilities for disabled travellers, facilities for businesses, and what can be found in the area surrounding the hotel. There are also descriptions on how to get to the hotels from Cambrils train station.

One Star Hotels in Cambrils

Cambrils is a reasonably upmarket town, but it luckily has the odd one star hotel. These hotels offer you the opportunity to stay in an area that is well known for its picturesque port and its high standard of gastronomy without having to break the bank. For listings, see our guide to one star hotels in Cambrils.

If you are not interested in any of the one star hotels on offer, it is worth doing some research into the pensiones available. These are somewhere between a hotel and a hostel - individual rooms with shared bathroom. Spanish pensiones can often be of a high standard with affordable prices. For details of the pensiones in Cambrils, see our Accommodation in Cambrils.

There are more three star hotels in Cambrils than any other class of hotel. See our 3 Star Hotels in Cambrils page for listings. You will notice that many of these hotels are either on the beachfront or within 200 metres of the beach. These will be the most appealing to you for a beach holiday in Cambrils. It is important to remember that some of the hotels that are located further from the beach could be on main roads, meaning that a car will be necessary for trips out from the hotel. Some of these types of hotels are best placed for a trip to Port Aventura Theme Park - only a short drive away.

Some of Cambrils' largest hotels are four stars. They are often like complexes with pools, sports activities and numerous restaurants, as well as a close proximity to the beach. You may find that many of these hotels deal almost completely with all-inclusive package holidays. For listings, see our Guide to four star hotels in Cambrils.

For more detailed reviews of some of Cambrils' most popular or well-known four star hotels, follow the following links:

If you finally decide that none of the hotels in Cambrils appeal, there are a plethora of other accommodation options available to you. Cambrils hosts a range of apartments and villas if you are thinking of going down the self-catering route. There are also a grand total of seven campsites in the area. If you are on the hunt for an affordable option, there are also seven pensiones (like hostels with individual rooms). You can find information and links for all of these options on our Accommodation in Cambrils.